Sunday afternoon, the Glassboro Historical Society hosted their third annual Civil War History Day at the West Jersey Train Depot. The program included historical reenactors, speakers, and a performance portraying the Libbey Prison Minstrels, a group of captured Union officers who later went on to play music together after the war ended.

William Carrigan, chair of the Department of History at Rowan University, was one of the speakers at the event. In his talk, he argued that the north should have been regarded as the underdog in the Civil War, since they had to completely capture the south, while all the Confederacy had to do was make the north grow tired of fighting and give up.

He also mentioned seven key events, including Kentucky remaining a free state during the war, the fall of Vicksburg and even the Union loss at the first battle of Bull Run. He believes all events were turning points that eventually led to Union victory.

Speaking after his presentation, Carrigan said that he enjoyed seeing the historical society put on this event, and was impressed with the dedication of every volunteer.

“It’s something that is very endearing to me, all the time, energy, sacrifice of money as well as their time that these volunteers are making to kind of help keep the memory of this really important period in American history alive,” Carrigan said. “I’m really grateful to see the diversity of folks out here, and the different ages. It was a refreshing time for me, and I was really pleased to be part of it.”

Robert Costello was one of the reenactors who followed Carrigan up on stage. He played Abraham Lincoln. His reenactment has taken him all over, including Gettysburg, where he has delivered a recitation of Lincoln’s most famous address. For Costello, whenever he dons the stovepipe hat, there are a few key things he remembers to do.

“As a reenactor, and a living historian [playing] Mr. Lincoln, my two key words are educate and entertain,” Costello said. “And every time I appear before an audience, no matter how large or how small, that is the thing that I am most interested in doing. I want folks when they leave here to know a little bit more about Mr. Lincoln. Not the icon, or the marble statue, but the man, the individual.”

People who came out to experience the event enjoyed it as well. Erin Pence, a Glassboro resident, was there with her two small children. She said that everything about the event, from the performers to the speeches were both exciting, and educational. For her, this was just a great opportunity all around.

“It’s [been] great.” Pence said. “They’re actually talking to the kids one on one, any questions they have, they’re answering, and I think the kids are really learning a lot.” 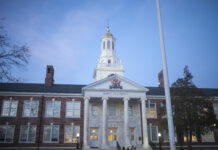 Yobb: A reflection on college