What do you get when you add a benefactor, several teams of Rowan students and a handful of new business ideas together? The Rowan Idea Challenge, of course.

The Idea Challenge was first started in the 2016-2017 academic year when students across campus were encouraged to apply with early-stage ideas. These ideas then undergo a two-month process of refining their products to be ready for the final competition.

Howard Lubert is one of the people behind the Idea Challenge. A 1974 Rowan University alumni and the managing director for Rowan Venture Fund, Lubert is a highly successful entrepreneur who is interested in helping Rowan students further their entrepreneurial careers. He also started the “Lubert Family Scholarship,” which is awarded to a hardworking student, interested in pursuing a career in entrepreneurship.

Along with providing an annual scholarship, Lubert is also the director of the Rowan Innovation Venture Fund (RIVF). This fund makes equity investments in students, faculty and new local ventures. The RIVF has created the Idea Challenge to make more students submit applications for funding. They want students to become interested in making their own ideas into a business.

The Rowan Center for Innovation and Entrepreneurship also helps to organize the Idea Challenge. They are responsible for working with the American Marketing Association to create a marketing campaign for the fund.

Lubert says he is very passionate about students wanting to become an entrepreneur and allowing the creativity to become a success. He has shown through his work that an entrepreneur needs to be able to rely on other aspects to succeed.

“I invented the concept of the idea challenge for two reasons,” Lubert said. “One, to get more deal flow into the venture fund, but more importantly to get an era of cooperation going between students in different colleges.”

Lubert has shown how diverse teams make the most success within the business world.

“The ability to take engineering, math, and business students and put them on the team, to me means there’s a better likelihood of success,” he said.

When entering the Idea Challenge, there are some qualifications each student must meet.

“One of our qualifications to move forward in the challenge is that you have to have two students from different schools within Rowan,” said Danielle Dimacale, senior marketing major and co-leader of the Idea Challenge. “Like one from business, one from engineering, or one from communications. So it’s a team effort.”

The idea of this challenge is to make every Rowan student come forth with their ideas and learn to cooperate with other majors to create a successful enterprise.

“People think it’s only in the business school but it’s really not”  said Antonia Nuzzolo, a senior dual major in marketing and entrepreneurship, and co-leader of Idea Challenge. “This challenge is meant for early stage ventures and ideas, and for people who have no business background.”

This year, applications for the Challenge are due on Sept. 28 at 11 p.m., while the final competition with be held on Nov. 17 at 1 p.m. To find applications and additional information regarding the Idea Challenge, visit rowan.edu/ideachallenge. 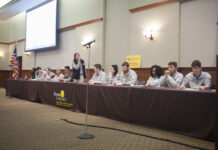 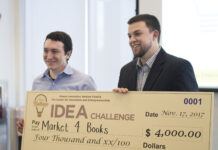