Residents of Mimosa Hall were forced to evacuate their dorms shortly before noon on Friday, after a fire started in a dorm on the first floor of the residential hall, according to a Rowan Alert sent to students across campus. Firemen from Washington, Harrison and Glassboro townships and other first responders quickly arrived at the scene to contain the fire while residents waited outside.

Students were notified at the time by a mass text sent out by the university. No one was harmed during the initial fire.

Rowan spokesman Joe Cardona said that when he left the scene, firefighters still hadn’t determined the cause of the blaze.

“When you look at the room, it’s like whatever the fire was was down on the ground in the corner,” Cardona said.

Cardona also said the sprinkler system activated and put out the fire, which caused water damage to the first floor of Mimosa hall and the six students in the dorm where the fire started will be temporarily relocated until rooms are cleaned.

Freshman history major and resident of Mimosa, Julianne Tarrant, said while she was not in the building at the time of the fire, she had heard that the fire may have been caused by a box fan in the window of the dorm.

Madison Klunk, an undeclared freshman living in the building, said the evacuation order was a major hassle for her.

“My aunt’s here to pick me up, and I can’t get in the building to get any of my clothes,” Klunk said. “So I’m going to have to leave and come back later and get it, and that’s an issue.” 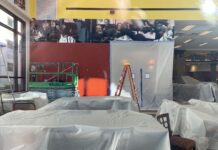 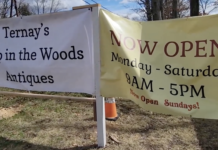 Ternay’s Shop in the Woods Reopens after Devastating Fire