History graduate Thomas Daly has brought attention to the neglected heroes of American history by creating a podcast all about them. Now, he will be the first to take on the challenge of incorporating neglected words and phrases of the English language into his show.

Daly’s podcast series, American Biography, is focused on telling the stories of important people in American history. However, rather than focusing on titans such as George Washington or Abraham Lincoln, Daly focuses on lesser-known figures.

“There’s only one George Washington, but there are dozens and scores of congressmen over the years who have helped shape the country,” said Daly.

Currently, Daly is doing a series of episodes focused on Former Chief Justice John Marshall, who Daly has been fascinated with since reading about him in a history textbook as a child. Marshall only took up two paragraphs in that history textbook, despite the important role he played in the development of the country as a founding father and a leader of the revolution.

Daly wanted to highlight lesser-known figures because while not everyone will end up being as renown as George Washington, their impact was still important.

“They’re worth knowing, so we’re worth living,” Daly said.

After graduating from Rowan in 2005 with a bachelor’s in history, Daly moved to Massachusetts to become a paralegal, where his commute to work in Boston is 90 minutes long. After becoming bored of playing through his music library in the car, he discovered history podcasts.

Daly’s favorite podcasts include Mike Duncan’s History of Rome, which he noted was “a gold standard” for history podcasts, as well as When Diplomacy Fails. However, Daly noticed a lack of American history podcasts.

“The podcast I wanted to hear didn’t exist, so I made it,” Daly said. He began recording in 2015.

As someone with no experience in audio technology, Daly had to learn podcasting on his own. Recording quality audio was a challenge for him.

“You take a leap in the dark when you start,” he said.

“It’s been cool to see his progression as a podcaster,” said Ryan McDermott, a reporter for The Washington Times, and a friend of Daly’s from Rowan.

In college, Daly, McDermott and other friends would talk for hours on various subjects. According to McDermott, Daly “was really good at storytelling,” as well as understanding the context of events, and showing they were relevant in the present.

The amount of time that goes into making each 30- to 50-minute episode breaks down to roughly six hours of research, and three to four hours of script writing. Having learned how to do extensive research as a history major at Rowan still helps Daly today.

Dr. James Heinzen’s historical methods class was most useful for making him into a strong researcher.

“Basically, it teaches you how to be a historian,” Daly said.

“He was very interested in the material and good at participating in class,” he said.

Heinzen was surprised when he found out that Daly went on to host a historical podcast, yet he always felt Daly was innovative.

“He falls into that category of history majors who are creative… and like to bring that love of history to other people,” Heinzen said.

In his next episode, Daly will be including words and phrases from the Endangered Word Project.

“[The Dictionary of American Regional English (DARE)] found the 50 most endangered words and phrases, and they’re looking for ways to raise awareness,” said Daly.

Since 1965, DARE has interviewed more than 3,000 people across the country to determine which dialects are in danger. They felt podcasting would be the best way to have these words and phrases heard.

Daly was contacted about the Endangered Word Project through Acast, the platform on which Daly hosts his podcast. Daly agreed to take part, knowing his podcast about “endangered” names in history was fitting for the project.

Some others are “to spin street yarn” (to gossip), “fogo” (an offensive smell), and “to bag school” (to play hooky).

Daly has created 20 episodes on John Marshall and he is still not finished. He plans to make a dozen or more episodes on Marshall. Next, Daly will discuss Kentucky politician Henry Clay. In the future, Daly will focus on historical minorities.

“This is not the straight white male podcast,” Daly said. “There’s a lot of people who have contributed to American history.”

American Biography can be downloaded for free from iTunes and Acast. 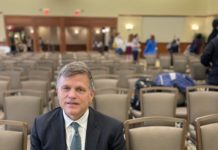 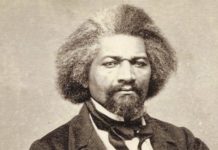 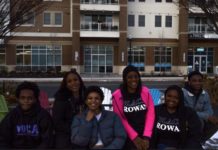