For Cassidy and the remaining Profs players, preparations for next season began the day after their final 85-65 loss. Only four of the 15 players currently on the roster are graduating seniors, so Rowan will return the bulk of its lineup for Cassidy’s 21st season as head coach.

However, they will be without Chris Gross and Dan Brogan, two top frontcourt players, and Kris O’Connor, their best wing guard, who was named an All-Conference honorable mention. That means Cassidy will have several needs to address this offseason.

Junior colleges and high schools across New Jersey start playoffs this week, and next week marks the beginning of the NJSIAA State Tournament.

“So you have to win three games in a week just to stay alive,” Cassidy added. “It gets kind of hectic in terms of recruiting stuff, but we’ll have more time as teams get eliminated.”

NCAA rules prevent coaches from discussing recruits before they sign letters of intent, but Cassidy said he is excited about the guys the team has been talking with. He also said he believes they will help out with the some of the biggest issues that led the team to a 9-16, 6-12 NJAC record.

Not all of these needs have to be addressed through recruiting, however.

The brown and gold are returning with twin brothers and guards Nick and Rob DePersia, who will be entering their sophomore seasons and were two of only three players to start in every game this season. The twins finished the year top five in scoring on the team, were first and second in assists and were in the top three in steals.

Forward Shawn Wilson, who led the team with 14.8 points per game and an All-Conference honorable mention, will be entering his senior year with the team. Forwards Gary Carthan, Josh Borrelli and TJ Booth were the top producers off the bench for the Profs and will be back for their final seasons.

Carthan contributed on the glass and from three, and said he is looking forward to playing a bigger role next season.

“Rebounding was our Achilles’ heel all season, so we have to improve on that, myself included,” Carthan said.

“They’re going to be really good,” Gross said. “It’s a young team; they’re losing us four seniors, but they’re getting the bulk of the team back. I think they’re going to be a problem in the NJAC for the next three or four years.”

In order for that to happen, the Profs will have to play consistently good basketball, which they struggled with throughout this season. Cassidy said he knows the team has a lot of work to do, and he intends to make the changes needed for his team to shine.

“We’re looking to make vast improvements going into next year,” Cassidy said. “And I believe we will.” 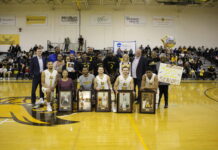 With their college careers coming to a close, men’s basketball seniors reflect on their time in Glassboro