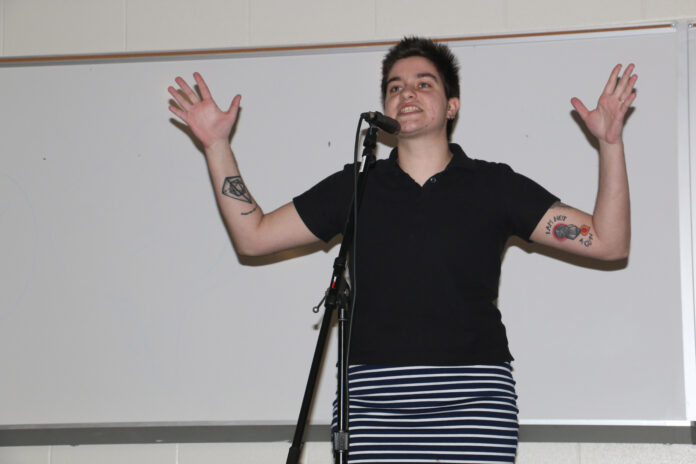 Poets from the Rowan College Unions Poetry Slam Invitational (CUPSI) team and Loser Slam, a local spoken word poetry team, engaged in a bit of friendly competition to help prepare student poets for the CUPSI competition at the University of Texas at Austin in early April.

The competition, held on Feb. 11, had four poets from the Rowan team and five poets from Loser Slam compete in five rounds, pitting individual poets against each other.

Poems were judged by three members of the audience chosen randomly by host and Rowan CUPSI assistant coach Scott Sigl. After each performance, the judges called out a score between one and 10, which were then added to the respective team’s final tally.

“In every single slam, whether or not it’s a youth slam, college slam, adult slam, whether it’s in your mom’s backyard or it’s on final stage at the National Poetry Slam, all the judges are picked randomly out of the audience,” says Linette Reeman, a sophomore history major and co-president of Lyrical Alliance. “That’s one of the things that makes slam a reactionary art form. It’s not seasoned judges judging every single poem all the time.”

Various topics were explored by the performers, including problems faced by transgender people, a pregnancy scare, the loss of a friend and struggles with eating disorders.

Judyth Brown, a member of Loser Slam, said she gets her gets inspiration from various interactions she has with people.

Jeremy Einbinder, a senior radio, television and film major, spoke about his recent experience at a hotel when a concierge judged his wheelchair and disability to render him incapable of signing his own name.

“I draw on my feelings of inadequacy with my disability in an ablest world,” Einbinder said. “I just talked tonight about a reaction to me that I thought was wrong so I wanted to talk about it and vent. I wasn’t able to yell at [the concierge clerk] in person, so I yelled at her here.”

Many of the poets use spoken word poetry as a healthy way to sort out their feelings on a situation or topic, but performing them can prove to be difficult, Reeman said.

“I really like the actual catharsis of writing poems, but definitely when performing, it’s just feeling like you’re doing something for other people,” Reeman said. “A lot of times, the catharsis I get from writing a poem is letting go [of] an experience or an emotion. In order to perform, – for me, not all poets do this – but I get back into the headspace. Sometimes it’s difficult emotionally to relive an experience that wasn’t favorable.”

The audience consisted of people new to slam poetry as well as fellow spoken word poets. Many people were receptive to the performances of the poets, enjoying the feelings brought forth by the various pieces.

“Sometimes the emotions can be a little too much for me because it’s just really intense,” says Liz Ditzel, a senior writing arts major. “But for the most part, it’s really amazing seeing somebody convey that much emotion through just their voice and their body.”

“I would highly encourage anybody else to come out and see it,” says freshman music major Jesse Panico. “They all dealt with problems that were somewhat relatable. These performers were very talented and they sort of allowed the audience to relate to them, even if they couldn’t within their own lives.”

For many of the performers, spoken word is a significant part of their life, acting as a sort of therapy to help them with their emotions and struggles.

“I’m a person who figures things out by talking, so when I get up onstage and say what I have to say, there’s an emotional aspect I don’t get to access any other way,” Brown said. “It is the very satisfying part of being alive.”

– Featured image:  – Linette Reeman is seen here performing at the All Jersey Slam. Linette is the Co-president of Lyrical Alliance the poetry club at Rowan University.  – Photo Editor/Justin Fata