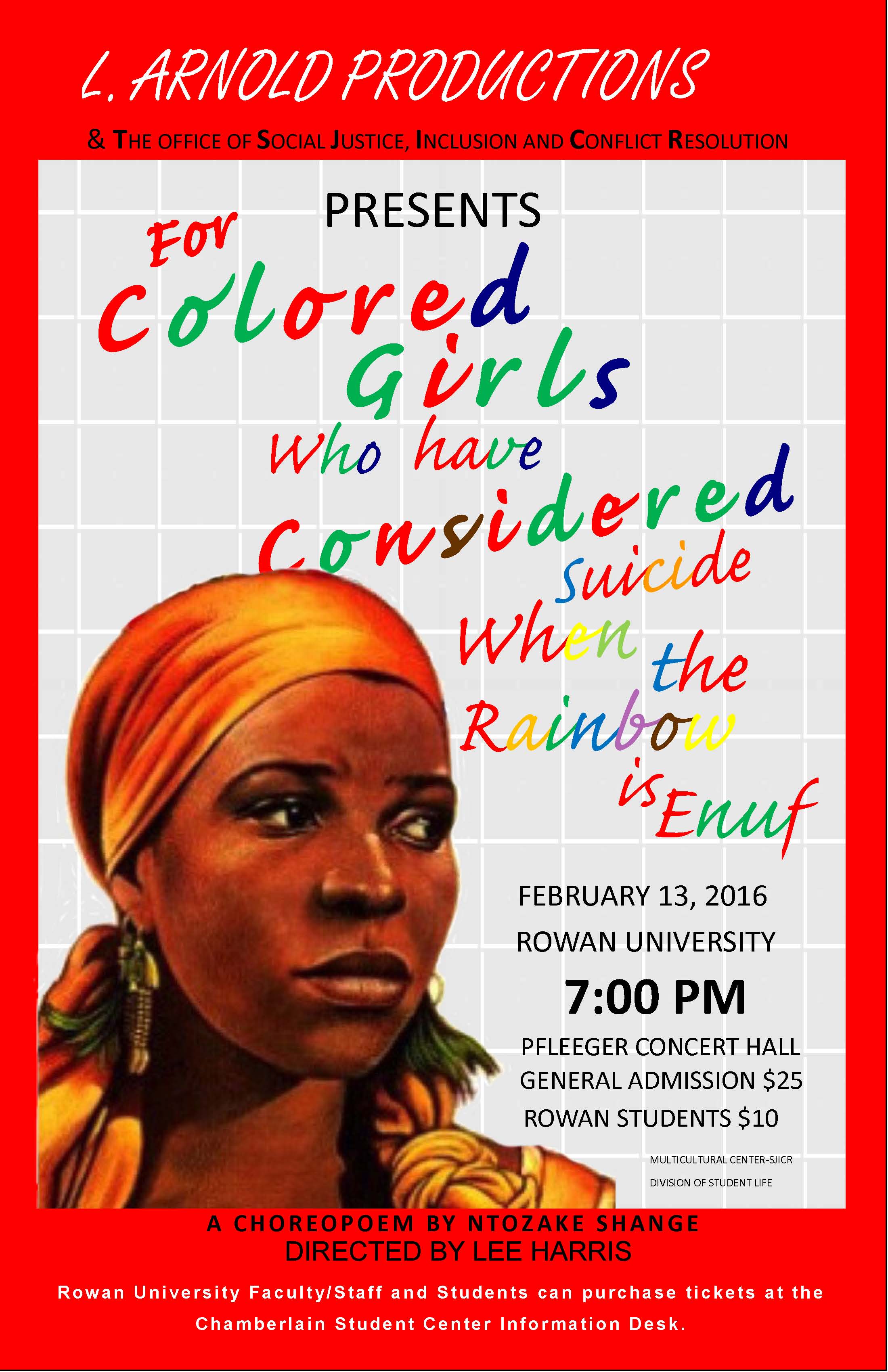 Two weeks into Black History Month, Pfleeger Concert Hall debuted “For Colored Girls Who Have Considered Suicide When the Rainbow is Enuf.” Written by Ntoake Shange in 1975 and first performed in 1976 at a coffeehouse in New York City, Shange created the play based on her real-life experiences and struggles with depression, loneliness, a failed marriage and identifying as a black woman living in America.

The play, which debuted on Feb. 13, was acted by Rowan students as well as professional performers. Michelle Brooks Thompson, a finalist for Season 3 of NBC’s “The Voice,” had a roll in the show. At the end of the play, Mr. Lee Harris, the playwright and director of Rowan University’s rendition of “For Colored Girls,” came out on stage and explained how this was the first modern representation of this play and how he pushed his actors to become their characters.

Dr. John T. Mills, assistant director of multicultural and inclusion programs, said that the production is significant to Black History Month as it is the second play in Broadway history to be written by an African-American woman.

“The production spoke to then, and resonates today as a platform that depicts the strength and resilience that not only black women, but women of [all] color possess in developing, strengthening, and expressing her identity and overall passions in life,” Mills said.

In the opening scene of the play, the audience meets all of the characters and hears their different struggles. The crowd listens to their stories of abuse, inequality, loneliness, depression and so on. These are all struggles that Ntozake Shange went through, as well as did many black women at this time in America. Marisa Rugel, sophomore public relations major at Rowan, was in the audience and was intrigued by the heart of the actresses and their characters.

“It was very eye-opening,” Rugel said. “I never heard of this play, so I had no idea what to expect, but I definitely wasn’t disappointed. The actresses got so into their characters and it was inspiring and relatable to not only young black women, but women everywhere.”

“For Colored Girls Who Have Considered Suicide When the Rainbow is Enuf” had a lot of attention brought to it with all the recent talk in the media about the Black Lives Matter Movement, as well as Beyoncé’s performance in Super Bowl 50’s Pepsi Halftime Show where her backup dancers were dressed as Black Panthers.

Actress Nia Lawrence, a junior psychology major, knew this play would raise awareness to Rowan’s campus during Black History Month and bring a voice to the voiceless.

“I would say that it raised a significant amount of awareness for Rowan specifically because we feel like we don’t get a lot of awareness on campus,” Lawrence said. “Hopefully we made a positive statement for the black community and for people to be aware that we just want to be looked at in the same way and want the same opportunities as the rest of the Rowan population. That was one of our main goals for this play, to raise awareness and just give a positive look on the black community.”