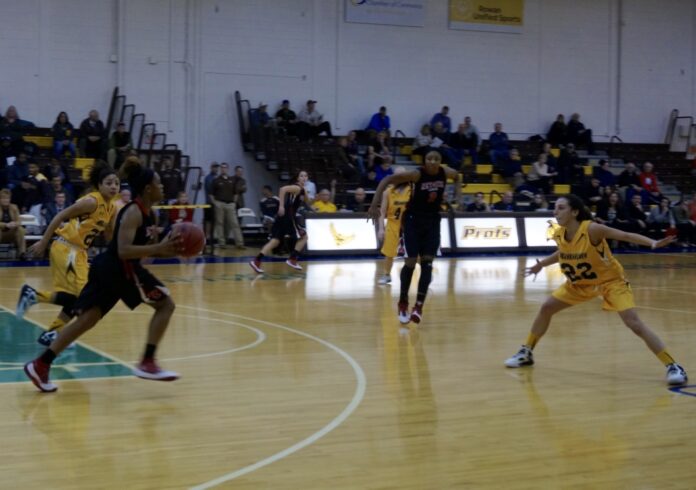 After defeating New Jersey Athletic Conference foe Ramapo College on the road by 25 points on Monday, the Rowan women’s basketball team returned to Glassboro, where they haven’t lost this season, on Wednesday night looking to sweep the season series against Rutgers-Camden.

“It was a tough game. They’re a physical team that rebounds very, very well. That creates opportunities for them,” head coach Gabby Lisella said. “I’m proud of us for really getting after it and coming out of the locker room and putting ourselves in a good place for a tough NJAC win.”

When the buzzer went off for halftime, Rowan trailed 37-31, but back to back three pointers from forwards Melissa Lake and Kaitlin Schullstrom quickly evened things up at the start of the third.

From there, the Profs went on a 13-5 run thanks to a slew of Rutgers-Camden turnovers and Schullstrom converting on some easy baskets.

The brown and gold exploded for a 29-point third quarter, almost matching their point total from the first half. Lisella pointed out that stretch as the turning point in the game.

“That’s the obvious answer,” Lisella said. “It comes back to energy we brought and the pressure we put on. When you get quick steals and convert them to layups, you get more opportunities. That energy has put us in the position we are right now.”

Whenever Rutgers-Camden seemed to be gaining momentum, Lake and Schullstrom were able to fire home three pointers to give the Profs an edge. Late in the fourth quarter, guard Anyssa Sanchez took over, driving to the basket and converting layups and free throws.

Both teams had trouble keeping the ball, as Rowan turned the ball over 23 times, 13 in the first half. Not to be outdone, Rutgers-Camden committed 27 turnovers of their own.

The biggest difference, however, was that the Profs capitalized on those miscues, racking up 31 points off of turnovers to the Scarlet Raptors’ 17.

“We turned the ball over too much in the first half. The response we had in the second half was great,” Lisella said. “The energy we brought back and the pressure we put on them is what we’re capable of doing. That was a good win.”