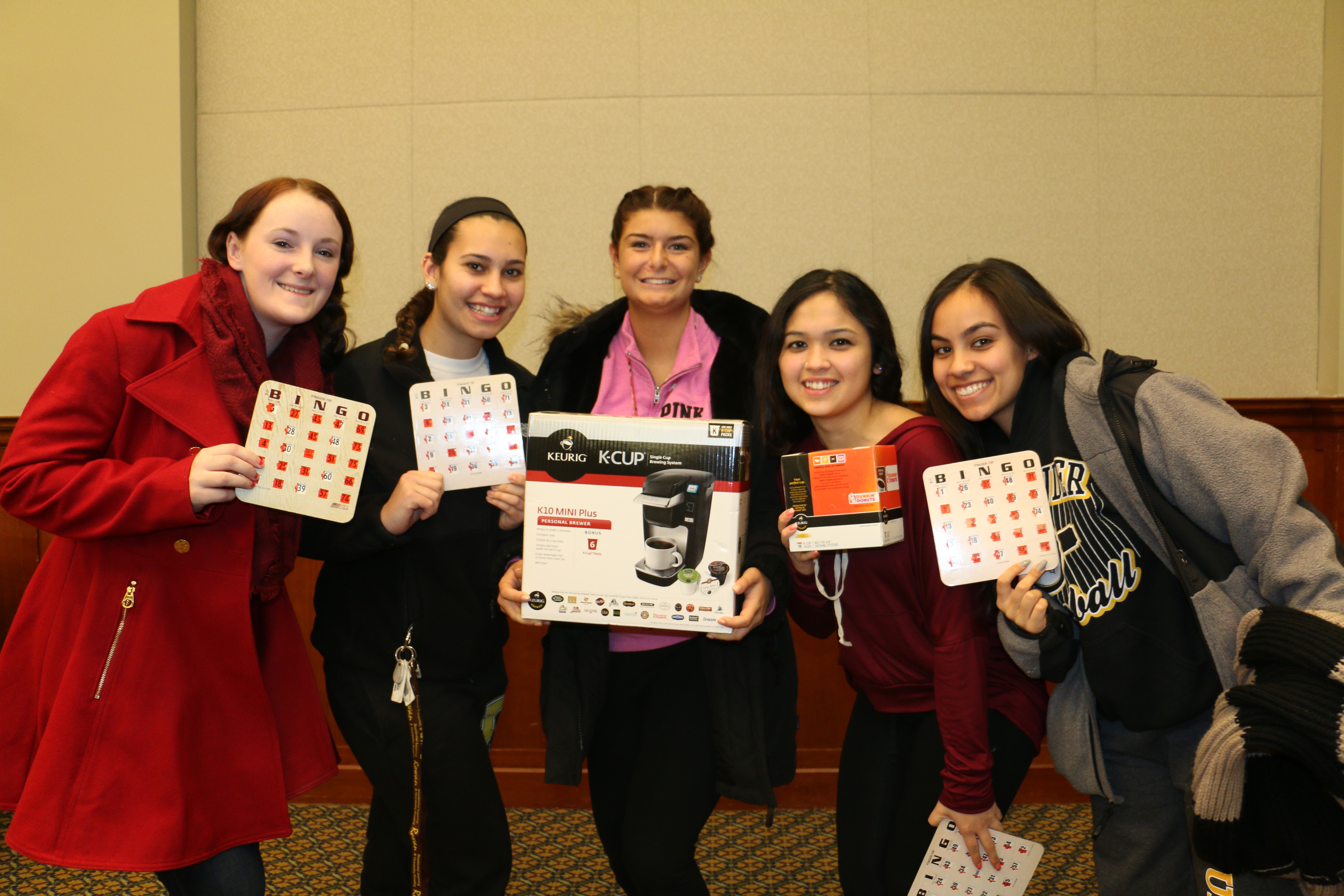 This past Thursday, Rowan After Hours (RAH) kicked off the new semester with a game of Classy Ballroom Bingo in the Enyon Ballroom at the Student Center.

The night consisted of 16 bingo rounds involving several types of board patterns to win, including regular bingo, Z-shaped, X-shaped, inner-box, outer-box and jail bars. Students were encouraged to wear formal attire to the event; if they did, they received an extra game board to increase their chances of winning the many prizes RAH had to offer.

Prizes included Rowan apparel, a Nerf gun, Barnes & Noble gift cards, a Keurig and “Snow Day Survival Packs” that were exclusive to the event. The packs featured cookies, hot chocolate, games, blankets, movies and other things a person might want when trapped inside during a snowstorm like the one that hit Rowan last weekend.

The extra-board advantage proved to be a good one for sophomore music education major Ben Schwartz; he is one of the few people to win two prizes in a bingo night: a Harry Potter collection and a 32-inch HD television.

“This is unbelieveable!” Schwartz said. “I doubled my chances by dressing up.”

Moesha Johnson, a sophomore journalism major, shared her excitement after winning one of the “Snow Day Survival Kits.”

“I’m really happy because I never win,” Johnson said. “I came with a really negative mindset, but I actually won something.”

While themes for bingo nights are decided before the semester begins, Classy Bingo was an easy choice for junior accounting major and RAH Student Programming Coordinator Tori Lawrence and her team.

“The theme of Classy Ballroom Bingo was actually one that RAH had done last year,” Lawrence said. “Both the students and the staff really seemed to enjoy the chance to dress up classy, so we decided to keep the same theme for this year.”

If a tie occurred, a quick match of Man, Bear, Taco (similar to rock, paper, scissors) or rolling a giant dice decided which winner received the prize.

Games in between rounds of bingo brought student volunteers to the front of the ballroom to compete for prizes. They included throwing balls into popcorn buckets, a dance-off and a new game called “Shoveling Snow.” For this challenge, players were given a plastic spoon which they used to “shovel” cotton balls from the table into a plastic cup in front of them.

“These short games give students a break in between rounds to move around and participate for some fun prizes,” Lawrence said.

Bingo nights at RAH are popular for more than just the possibility of winning various items.  Students also go for to hang out with friends and have a good time.

“I think it’s a good opportunity for new students who don’t really know a lot of [people] to get involved without being special at any skills,” said Yusang Jung, a freshman biomedical engineering major. “It’s easy to participate in and exciting.”

Bingo nights occur three times a semester. Some contribute its popularity to the enjoyable environment.

“I was filling out RA applications to become a RA again next year,” said sophomore electrical and computer engineering major Autumn Brown, “but this seemed like more fun.”