Tanvi Koduru, a sophomore entrepreneurship major, woke up one May morning during final exam week, spent the remainder of her printing money on 150 colored posters and walked around campus for over two hours posting them on the back of women’s restroom stalls.

“Notice Something Missing?” read the poster. “Join the Period Movement at Rowan University.”

The only places Rowan University supplies free tampons are the Student Center desk, the Rec Center, the Women’s Center in Hawthorn Hall, the Wellness Center and the Advising Center in Savitz. Menstruators have to ask to get these products. Unfortunately, studies show that many are uncomfortable asking.

“Our university’s understanding of it is since they are available in these locations, a student can go get them from there,” said Koduru.

The posters cost 25 cents per copy, but students have a $40 credit each semester from their tuition. Koduru, who wrote an informative Her Campus article about “Period,” a documentary which talks about the menstrual struggle in India, used all of that credit.

“I went to every floor of every building with a clipboard that was holding the posters and a roll of tape. I used up most of the tape. It was worth it,” Koduru said.

She taped posters to the back of women’s stalls in the academic buildings, on empty dispensers in Robinson, inside gender neutral restrooms and on the back of restroom doors. One of her male friends even placed some in the men’s restrooms because not all menstruators are women.

Within the day, all the posters were taken down despite efforts to put them back up.

Still, Koduru received about 10-15 emails and about 20 Instagram messages from students who saw the posters. Those emails and messages led her to her current e-board and club members.

The Period Movement is a non-profit whose goal is to “fight to end period poverty and period stigma through service, education and advocacy,” according to their website. It was founded in 2014 by Nadya Okamoto and Vincent Forand when they were 16-year-old high school students.

Okamoto was inspired to start the movement after hearing stories from homeless women who needed pads and tampons. The homeless women she encountered would use cardboard and tissues because they couldn’t afford anything else, which can cause infections like toxic shock syndrome.

“One of the biggest things that always hits me when I listen to her [Okamoto] speak about it is a woman should never have to choose between buying menstrual products and buying a meal, and that is a reality for so many homeless women. They have to decide between those two things and that’s heartbreaking,” Koduru said.

Students shouldn’t have to pay two dollars for a tampon from a snack machine on campus over a meal. Providing period products in vending machines is Rowan University’s latest “solution” to make tampons more accessible.

The last poster of the Period Movement that still remains today is located in the lounge area of Hawthorn Hall, home to the Office of Social Justice, Inclusion, and Conflict Resolution (SJICR).

According to Aunt Flow, if free menstrual products are offered on campus, class attendance would increase by 2.4%.

Aunt Flow, a menstrual product company, posted a video on Twitter showing how easy it is to install their organic cotton pad and tampon dispensers for public schools. Their mission is to have menstrual products free and accessible for everyone.

If Rowan University administrators worked with Aunt Flow, it would cost approximately $30,000 a month, according to Koduru. She said if the student’s tuition is $15,000 a year, you would need eight students’ tuitions to supply products for the whole semester (four months). However, it is uncertain how many products would be needed, so it could cost less or more.

Koduru explained how people might worry that someone would take all the supplies if they are accessible in restrooms. However, once people realize the supplies are here to stay, people will take what they need and leave the rest of the tampons and pads for others in need.

While Koduru visited family in India over the summer, she talked to a group of five women on Google Hangouts to organize the first National Period Day, which occurred Oct. 19 in Hinds Plaza in Princeton, New Jersey from 3 to 4 p.m. She said about 90 people came to the event.

According to an article from The Daily Princetonian, New Jersey’s rally was run by Koduru, president and founder of Rowan University’s period chapter, and the co-presidents of Moorestown’s period chapter, Annabelle Jin and Chai Kim, a high school junior who founded the chapter and a high school senior, respectively. They had 10 speakers, including Koduru.

“There are legislators right now writing bills on how to get menstrual hygiene products in public schools and how we need to have them in public schools, so we’re fighting for equality regarding that,” Koduru said.

The main reason for the rally was to eliminate the pink tax on tampons and pads in 33 states (Ohio recently exempted period products from the sales tax). New Jersey doesn’t have a pink tax, so their rally focused on menstrual equity and how people get their products.

There were 60 rallies in 50 states and four countries.

They reached out to legislators and senators to speak, but unfortunately didn’t get any to speak at the event.

Koduru was the only Rowan University student who spoke and brought signs made by Rowan students involved in the Period Movement. She hopes next year they can afford a bus to commute students to Princeton, which is an hour and a half drive.

“It was really empowering to see young women younger than me, almost 15, 16 and 17 — actually high school students speaking about menstrual equity and how they are working towards fighting it in their local communities in New Jersey,” Koduru said.

What’s next for the Period Movement?

The Period Movement has been focused on the rally, but now that it is over, Koduru wants to focus on advocating the cause to administration to get period products on campus.

“The way we view toilet paper and paper towels, we should be viewing menstrual hygiene products, because when a biological cis-gender male walks into a restroom he has everything he needs to be successful,” Koduru said. “But when menstruators walk into a restroom, they don’t have everything they need to be successful because they lack menstrual hygiene products.”

The Period Movement is trying to become a SGA-chartered club, however, it takes a whole year after a club becomes official to get funding from SGA.

“I firmly believe that the budget for these products should be coming from the same place as toilet paper,” Koduru said. “It shouldn’t be coming from student government funding. It’s not like a bake sale — this is something that happens to any menstruator once a month and they need access to products in order to have a productive day and a productive week.”

Within the next two months, she wants to start a pilot program for period products. For the program, they need $500 and right now they have $200, which was donated to them. The pilot program would start in the Student Center restrooms. They would keep track of how many products are used and how many they need to sustain for a month long to get an idea of a budget cost to give to administration.

Another problem in our society is the fact that people don’t want to talk about periods.

“It’s something that everyone needs to talk about because that’s the only way the stigma attached to periods disappears,” Koduru said.

In November, the group wants to have a #askmeanything event to encourage people to come out and ask any questions they have.

“I hope that administrators understand that menstrual hygiene equality is an issue beyond just something that just needs SGA funding,” Koduru said. “I hope they understand that when students are unable to have these products, they lack the essentials they need to have a productive, current education and possible future. I really hope that they feel that they can come to me with questions regarding what they can do to help and that they know that I know that the gap is the stigma surrounding it, not the fact that they don’t want to help us.” 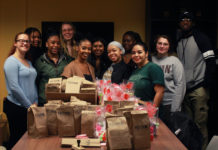