However, there are clear indications that the Profs remain focused and confident, eyeing their New Jersey Athletic Conference (NJAC) opener on Friday night.

The Brown and Gold suffered their first crushing defeat of the season by a score of 4-3 at the hands of the University of Lynchburg’s Hornets in Virginia, a team they defeated twice last year, including their Sweet 16 victory in the NCAA Division III Tournament.

In such an uncharacteristic defensive performance displayed by the Profs, the team allowed a season-high four goals after recording three shut-out victories and conceding only three goals over the previous five games before Saturday.

Head coach Michelle Andre affirmed that the lack of defensive support from the midfielders resulted in many aggressive pushes from the Hornets offense.

“We need to work on our midfield defense, especially defending when girls are coming at us,” Wagner said.

Wagner’s encouragement as a captain will play a major factor in the team’s performance against William Paterson on Friday night. The team may seem more motivated and prepared for their match-up against the North Jersey school.

“The younger girls do not take the loss as seriously as the older ones, because we built this team from when we did not used to win many games until we completed an undefeated season,” Wagner said. “So I need to tell them that this is a big deal, to pick it up because we have high standards.”

After an impressive performance over the weekend, in which she contributed an assist and earned Rowan’s Athlete of the Week, Wagner insists there is no need to hit the panic button.

“We have to move on,” Wagner said. “Right now we have conference games coming up and that is what’s most important, winning within our conference.”

“I am not concerned,” Andre said. “I know the team has the drive, the will and the desire to bounce back. They will make the adjustments we need to fix and we move forward.”

Although the program lost for the first time this season, the Profs only dropped to the fourth-ranked team on the Penn Monto/NFHCA poll. Therefore, it is fair to say that the Profs continue to be in a prime position to take control of their destiny and exceed their expectations. Never count out this, quite literally, goal-driven team.

The Prof’s quest for a consecutive NJAC title continues Friday afternoon, when they are set to play the Bears of William Paterson University in Wayne, NJ at 6 p.m. 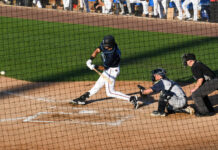